Harpers Ferry is a small town where the Potomac River cuts through the Blue Ridge and meet the Shenandoah River. Robert Harper started a ferry across Potomac in 1747 which gave the place its name.  Harpers Ferry is mainly known for abolitionist (want to end slavery) John Brown’s failed raid in 1859 to arm enslaved people. John Brown’s trial and execution focused on slavery and escalated tensions that led to the American Civil War. During our trip to the eastern USA, among other historical sites, our American family took us to Harpers Ferry. The hospitality and generosity of our American family were unforgettable, therefore this post is dedicated to Kurt and Marie.

More about our visit can be seen on Maria’s blog “Seen in the National Park in DC“.

Map of Harpers Ferry (pamphlet National Historic Park) at the corner of Maryland – Virginia and West Virginia. Robert Harper started a ferry across Potomac in 1747 which gave the place its name. 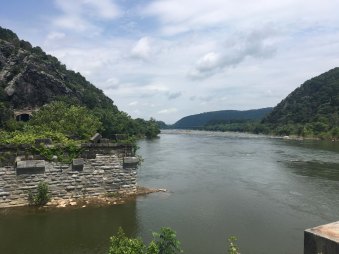 Artist’s rendering of the Potomac ferry at Harpers Ferry, looking downstream from The Point at the confluence of the Potomac and Shenandoah rivers. Maryland Heights looms above the far (left) shoreline. The ferry connected Harpers Ferry with the wagon road to Frederick, Maryland, which terminated at the foot of Maryland Heights. Artist: Carol Stuart Watson Credit: Harpers Ferry Center Commissioned Art Collection (IMS 02846) Year: The Potomac Ferry operated from 1747-1824 (cited from National Park Service). 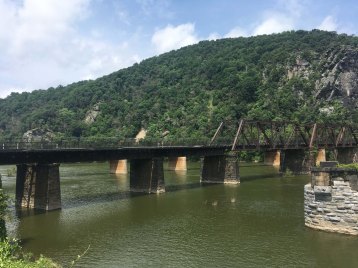 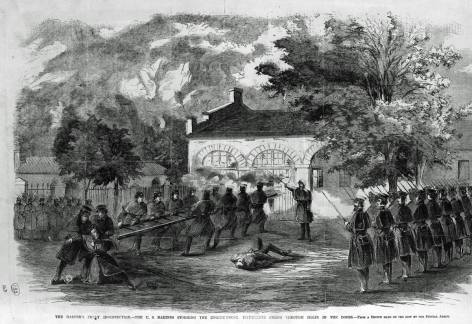 In front of this house we read the display:

Here is a building with a curious past. Since its construction in 1848, it has been vandalized, dismantled, and moved four times – all because of its fame as John Brown’s stronghold.

We read further to see why it is famed:

On October 16, 1859, the abolitionist John Brown and his men attacked Harpers Ferry. By the following afternoon, the local militia had penned the raiders in this building. United Marines stormed the building at dawn on the 18th and captured Brown. Convicted of murder, treason, and inciting slaves to rebellion, he was hanged in nearby Charles Town on December 2, 1859.

Abolitionist – a word I had to look up – Webster’s Encyclopedia and Wikipedia gave this interesting explanation:   Movement to end slavery e.g. especially of Negro slavery in the USA.

On a tablet, at the house, we read this description:

That this nation might have a new birth of freedom. That slavery should be removed forever from American soil. JOHN BROWN and his 21 men gave their lives. To commemorate their heroism his tablet is placed on this building which has since being known as JOHN BROWNS FORT. By the Alumni of Storer College 1918.

We then visited the John Brown Museum to learn more about this remarkable man. 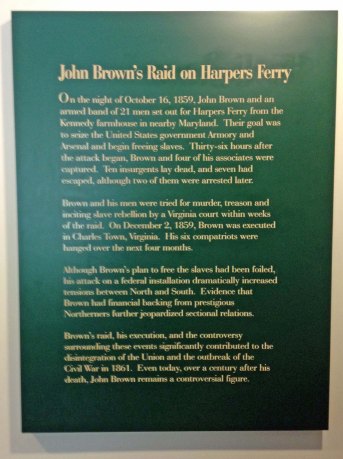 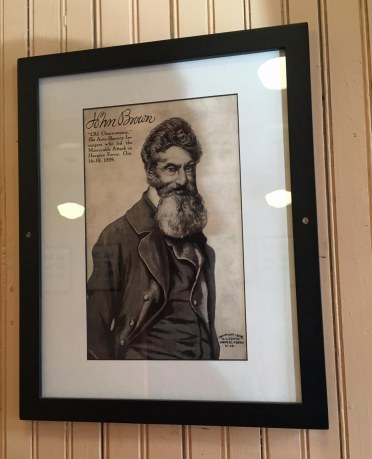 Display at the museum and from the museum’s website. John Brown left an indelible mark on American history. Far more than a small fight on the border of Virginia (now West Virginia) and Maryland, John Brown’s raid covered many miles and involved more than a thousand people. Today, a complete tour of key sites in this story would span several hundred miles in four states and the District of Columbia. The reaction of individuals, local, state and national governments played out on horseback, train, and telegraph, from family firesides to the office of the President of the United States. 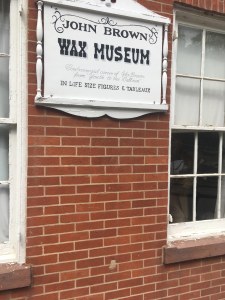 We also visited the John Brown Wax Museum who graphically tells the story of John Brown and his raid on Harpers Ferry. The display was very moving and we did not get any good pictures. This short video from Youtube gives an impression of the exhibition.

John Brown’s raid, his execution, and the controversy surrounding these events significantly contributed to the disintegration of the Union and the outbreak of the Civil war in 1861.

We just needed a break and a good ice in order to digest all this historical facts and events. 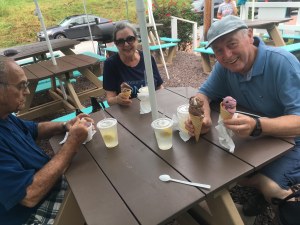 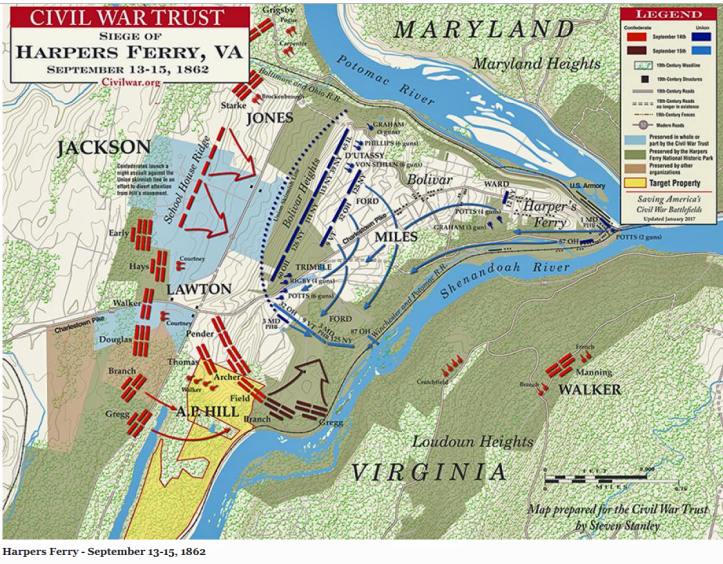 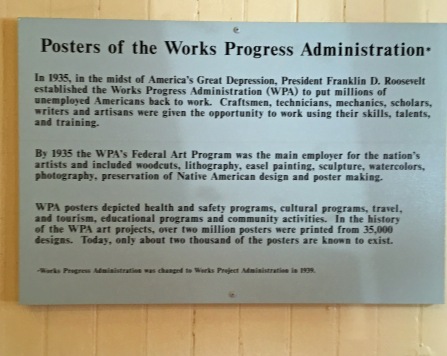 The Work Projects Administration (WPA) Poster Collection consists of 907 posters produced from 1936 to 1943 by various branches of the WPA. Of the 2,000 WPA posters known to exist, the Library of Congress’s collection of more than 900 is the largest. The posters were designed to publicize exhibits, community activities, theatrical productions, and health and educational programs in seventeen states and the District of Columbia, with the strongest representation from California, Illinois, New York, Ohio, and Pennsylvania. The results of one of the first U.S. Government programs to support the arts, the posters were added to the Library’s holdings in the 1940s.

We managed to take pictures of a couple of the posters in the train station showing here at this slideshow. The description of the WPA posters was so interesting that I had to check out the Library of Congress collection.  I added a couple of posters to this slideshow. As an old farmer myself two about farming and two of “Doll and Buggy Parade” for Maria. A poster about the Federal Theatre Project presentation of Battle Hymn at the Experimental Theatre east of Broadway showing a silhouette of John Brown.