Home of the Viking Kings

In summer 2016 we had a visit from our lovely American cousin Leah who came to see her ancestors’ bird places. Among other places, we made a short and brief visit to “Vikingekongernes Jelling”. Here a short summary of the Jelling area we did not have time to visit.

Maria and I made a visit later and I was surprised of all the new excavation and discovery of this amazing construction that was erected in a very short period of king Harald the Bluetooth. It is estimated that the oak used for the palisade were cut in 968. The palisade was 1.4 km total. Our guide who showed us around made a joke – if we could see the similarities between King Harald and this amazing construction and Putin and his Sochi Olympic park?

Both sites were built to impress people and because these two “rulers” could do it. Both sites did not last long. Harald’s Jelling was of unknown reason burned and deserted – Putin’s Opympic park are today empty and hardly used.

Home of the Viking Kings (from various sources):

In the tenth century, at the highest point in the landscape west of Vejle, the kings Gorm the Old and Harold Bluetooth created a monument that is unique in the Nordic context. The oldest feature is the remains of a huge ship-shaped stone setting – then came the rune stones and the mounds, and finally the palisade.

Gorm the Old’s Rune Stone links the royal couple Gorm and Thyra to a kingdom called Denmark. The story continues on Harold Bluetooth’s Rune Stone, which describes a central event in the history of Denmark: The King’s acceptance of Christianity on behalf of his whole people. For that reason, the Stone is often called “Denmark’s Certificate of Baptism”.

Aerial view – the rune stones beside the church and a gigantic grave marker – a ship setting 350 m. Originally 300 large stones some more than 1 m. – Today only a few visible. Some are buried under the South Mound. The palisade is first recently excavated and marked by concrete pillars. 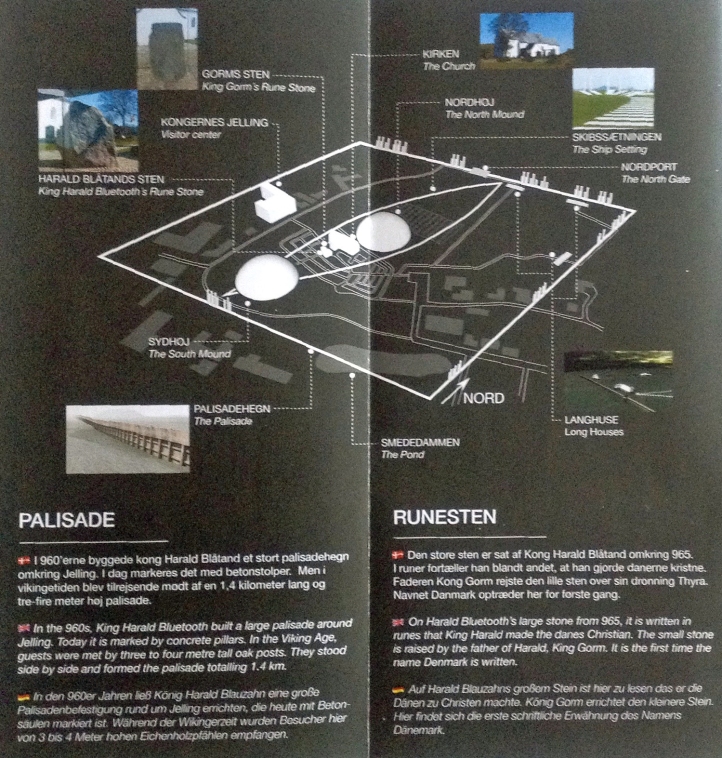 From the brochure “Vikingekongernes Jelling”. 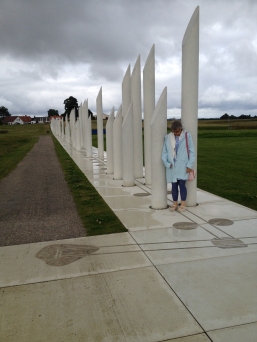 Maria standing at the north corner. – Illustration of the palisade. 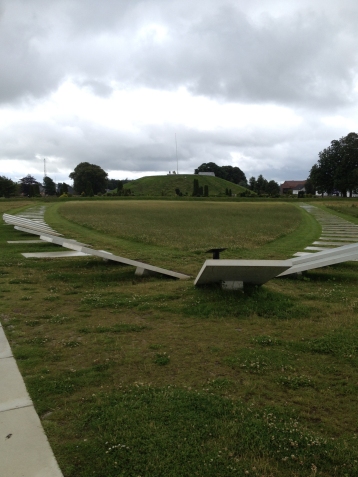 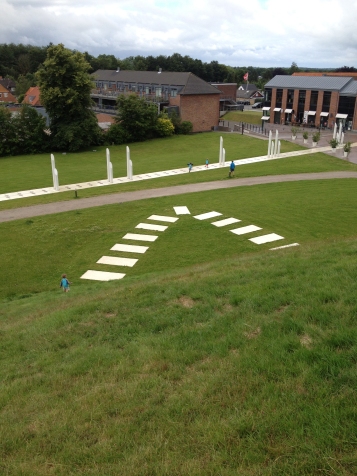 The Jelling stone a good day with sunshine. – Once it was colored – assumed look. In 1700 hundred there was still rest of the color, but then a king was coming for a visit – the stone shouldn’t look like that – and it was completely “cleaned” !! 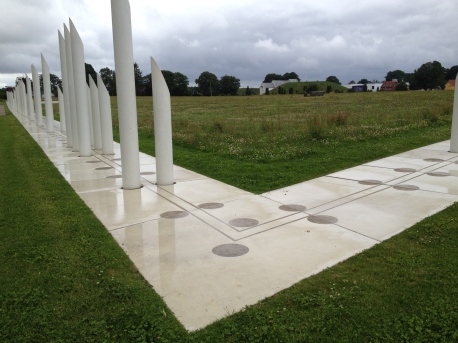 Church and north Mound are seen from the northeast corner. – Full size reconstruction.